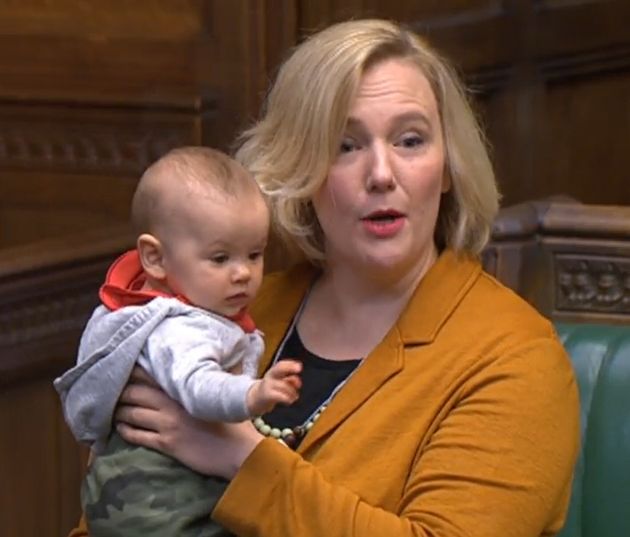 Stella Creasy was told off after taking her baby with her into the Commons this week, revealing the stark reality for new mothers trying to return to work.

The Labour MP was told it was against parliamentary rules to bring a child into a Westminster Hall discussion hours after she carried her three-month-old son with her to a debate on Tuesday.

Creasy said this was “news to me” having taken her – whom she is still – to debates before, and has now called for a review of the parliamentary rules.

The Commons has said it is now “in communication” with Creasy, after pointing out to her that “you should not take your seat in the Chamber when accompanied by a child” according to the Westminster rules which were last updated in September.

But the MP pointed out that she did not experience any pushback when she used to take her older daughter into the Commons chamber.

In a now-deleted Twitter post, Creasy shared the email she received from parliament about taking her child into the Commons and tweeted: “Mothers in the mother of all parliament[s] are not to be seen or heard it seems….#21stCenturyCalling.”

Labour MP Stella Creasy has called for reform after being told her three-month old baby was not allowed in the Commons.

She tells @KayBurley that “I think it’s just representative of the way in which often if you’re a mum you can’t win”#KayBurleyhttps://t.co/iOm40vn1ktpic.twitter.com/rgudYAiPeh

Creasy was also quick to point out that there are still no rules on wearing face masks in parliament either, even though the pandemic continues to be a pressing concern.

She has since told the BBC that this is “not a system that works for anyone who isn’t a man of a certain age from a certain background”, describing the current scenario as one which “is bad for our democracy”.

“I’ve had a baby, I haven’t given up my brain or capacity to do things and our politics and our policy making will be better by having more mums at the table,” Creasy added.

Speaker of the house Lindsay Hoyle has subsequently asked Commons Procedure Committee to look at rules around bringing babies into the chamber.

Do MPs receive any help with a newborn?

MPs are allowed to have paid maternity leave for six months and a proxy vote, but many have said it’s difficult to obtain funding for adequate maternity cover.

They still have have to be physically present to represent their constituents’ views during debates as well.

An emerging gender divide in remote working could risk inhibiting women’s career progression if employers favour those who are present in the office.Resolution Foundation

What have other MPs said?

Deputy prime minister Dominic Raab has said he has “a lot of sympathy” for Creasy, as politicians need to make sure “our profession is brought into the modern world [so] parents can juggle the jobs they do with the family time they need”.

He added that a baby in the Commons “certainly wouldn’t distract me or get in the way of me doing my job”, but he said it was up to the House’s authorities to decide the “right balance”.

Labour MP Alex Davies-Jones tweeted on Tuesday that she had been told by House speaker Lindsay Hoyle that she could breastfeed in the chamber if she needed to.

When I was first elected I was still exclusively breastfeeding my child.

I met with @CommonsSpeaker to discuss this and was assured that if the need arose I would be able to feed my child in the chamber or Westminster Hall.

This rule is now a complete contradiction 🤔 https://t.co/xJWK6BHQoI

Former Liberal Democrat leader Jo Swinson is believed to be the first woman to take a baby into the chamber back in 2018.

New Zealand’s prime minister Jacinda Ardern was also the first world leader to take her baby to the floor in New York for the UN General Assembly, also in 2018.

Why is this so different from the statistics?

A survey called Begin Again? – studying how people returned to work after the pandemic – claims 74% of mothers with children aged from 0 up to 3 are now in work.

The research said points out that this is an increase compared to previous years. Only 68% of mothers with children that young worked in 2019 and 2017.

The findings suggest that the hybrid working model introduced by the pandemic has made it easier for primary care givers to cope with work and parenting.

The report also found one in 10 mothers in a relationship said remote working allowed them to find work or increase working hours since February 2020.

Yet, the authors of the study noted: “An emerging gender divide in remote working could risk inhibiting women’s career progression if employers favour those who are present in the office.

“As we have recommended before, policy makers and employers alike should support working parents, no matter their gender, to balance work and childcare without detriment to their longer-term career prospects.”