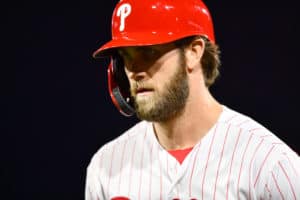 Bryce Harper is going to be a father for the first time. (Kyle Ross/Icon Sportswire)

The Philadelphia Phillies will open up a crucial three-game series in Miami this weekend against the Marlins, as they attempt to reach the postseason for the first time since 2011. At least to open the series, Gabe Kapler’s squad will be without their hottest hitter.

The Phillies announced Friday afternoon that Harper has been placed on the paternity leave list. Harper and his wife, Kayla, announced in April that they were expecting their first child. There isn’t an immediate timetable on Harper’s return.

Here’s the other twist in this story – Maikel Franco has been recalled to replace Franco on the roster. In a move that seemed to signal that he won’t be with the Phillies past 2019, Franco was optioned to Triple-A Lehigh Valley in early August. The 26-year-old almost certainly would have been recalled in September when rosters expand. There’s a very real possibility that when Harper returns, Franco is again sent to Triple-A Lehigh Valley for a week or so until roster expansion in September.

The Phillies will enter the weekend with a 66-60 record, two games back of the St. Louis Cardinals for the second National League Wild Card spot.