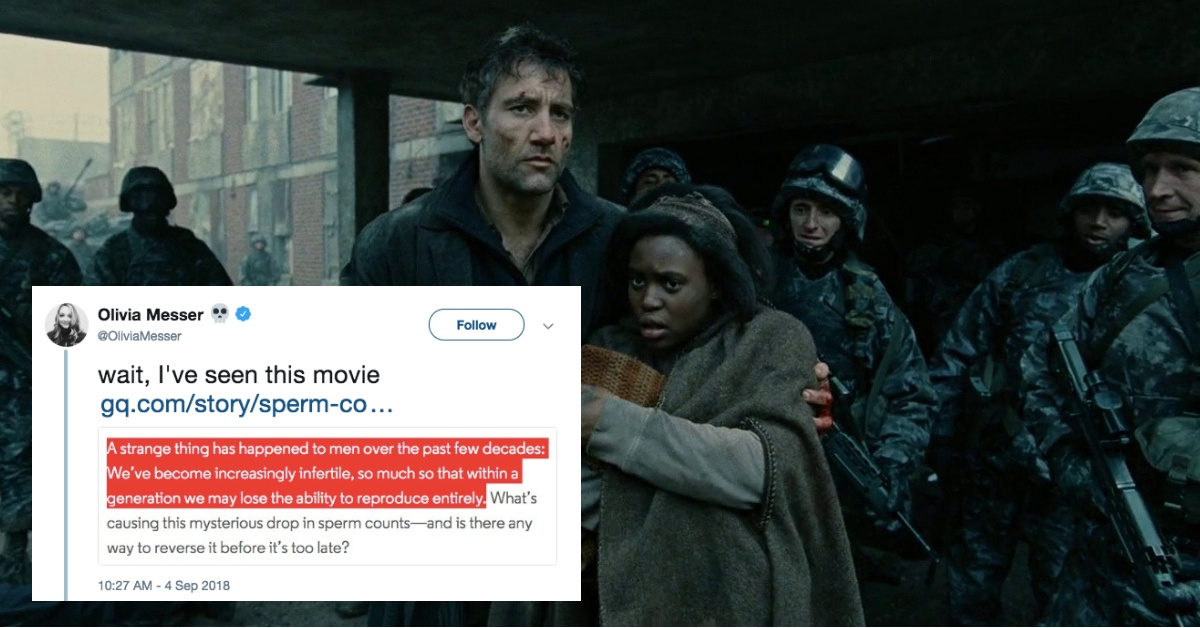 A new article by GQ titled “Sperm Count Zero” discusses how men’s sperm counts have been decreasing, and that it might not be long before we lose the ability to reproduce. Sound familiar? Yeah. That’s essentially the plot of 2006 film, Children of Men.

The GQ article begins with the following,

“A strange thing has happened to men over the past few decades: We’ve become increasingly infertile, so much so that within a generation we may lose the ability to reproduce entirely. What’s causing this mysterious drop in sperm counts—and is there any way to reverse it before it’s too late?”

It continues to refer to a 2017 study by Hebrew University and Mount Sinai medical school. According to the study, sperm counts in the U.S., Europe, Australia, and New Zealand have dropped by more than half over the last 40 years. The study included sperm samples from nearly 43,000 men.

“We should hope for the best and prepare for the worst. And that is the possibility that we will become extinct.”

The study also showed that testosterone levels are dropping and therefore men’s anogenital distances (AGD) are also measuring shorter. The AGD is the measurement between the anus and the genitals, and a man’s is typically twice that of a female’s. However, with lower testosterone levels come shorter AGDs. A short measurement of the AGD in men has been correlated to subfertility.

Shanna H. Swan, another lead author of the study said,

“What you are seeing in a number of systems, other developmental systems, is that the sex differences are shrinking.”

Why is this happening? Experts believe that modern technology and science has caused humans to ingest a lot of chemicals and compounds that affect our hormones, including estrogen and testosterone.

Some of these chemicals, like BPA, can actually “change the way genes are expressed without altering the underlying genetic code”. This means that traits not normally passed down by genetics, like low sperm count due to obesity, can now actually be inherited.

So, what can be done? It appears that the damage done by chemicals cannot be undone, and can only be remedied by other chemicals, all of which have unknown consequences. But if IVF technology continues to improve, and new technology, like IVG (in vitro gametogenesis) which shows the first stages of turning embryonic stem cells into sperm, continues to develop, humans might just have a shot at surviving.

But, again, this entire thing sounds like Children of Men. The film was directed by Alfonso Cuarón and told the story of a dystopian future where women are unable to have babies. Despite its star-studded cast, the movie flopped.

Interestingly though, two years ago, 10 years after its release, the movie made headlines again. One such article was titled, “Are We Living in the Dawning of Alfonso Cuarón’s Children of Men?”

Political scientist, Francis Fukuyama spoke about the film saying that the movie was

“obviously something that should be on people’s minds after Brexit and after the rise of Donald Trump.”

And on people’s minds it is yet again.

But whether or not the 2006 film starring Clive Owen should have been a warning, people are kind of freaking out.

Others have found the news to be eerily similar to another dystopian story.

Too many dystopian stories seem to be coming true 😳.