And You Thought Biglaw Was Bad: Prosecutor Assigned Murder Cases On Maternity Leave | Above the Law 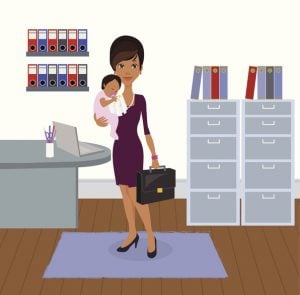 Parental leave is designed to afford workers an opportunity to take care of tiny humans, it’s not supposed to be a time when you get assigned additional high-stakes work. But that’s exactly what happened in the St. Louis prosecutor’s office.

A murder case against Brandon Campbell was dismissed last week by St. Louis Circuit Judge Jason Sengheiser, because the prosecutor’s office had “abandoned its duty to prosecute those it charges with crimes” after the office no-showed for three separate court hearings and missed a court-order production deadline. Campbell was recharged with crimes, but it begs the question — why didn’t anyone show up in the first case? It turns out the attorney assigned to the case, Kimberly Arshi, was only given that assignment a week after she’d already begun maternity leave.

Circuit Attorney Kimberly M. Gardner blamed the dismissal of charges against Campbell on “internal policies and procedures regarding family medical leave.” She said “corrective measures are needed to further prevent any future repeat occurrence of the incident in question,” but failed to give any reason why no one else was assigned the case while Arshi was on leave.

Besides this case, St. Louis Post-Dispatch reports Arshi was also assigned at least nine (9!) other felony cases while on leave including a death penalty murder case, two other murders, three robberies, and two assaults. This is more than a simple administrative slip up. This is a massive miscarriage of justice, especially given the lack of a plan to have someone cover while she was gone.

Peter Joy, a law professor at Washington University, told the Post-Dispatch that 12 weeks — a common length for maternity leave — “is not a long time in felony cases. It would depend on what the trial date is, and also when the person is anticipated back. So it may be reasonable because experienced trial lawyers may be able to pick up a case and get it ready in a couple months.” But still not a reason why no one was assigned to cover Arshi’s cases.

Nick Zotos, a defense lawyer in one of the cases Arshi was assigned while away, said, “It’s just a small reflection of what’s going on in the office. Either they don’t care or they’re sloppy.”

And he’s not the only one with that opinion:

PLI’s health care programs allow you to keep up with the law and trends while earning CLE. From COVID-19 developments to digital health to workplace…

Matt Waltz, a public defender for clients in at least two cases recently assigned to Arshi, said that when he took medical leave some time ago, his office did not assign him any new cases. He speculated that assigning Arshi cases while she’s on leave was a stall tactic until she returned.

Earlier this week, Arshi reportedly resigned from her position. Hopefully her next job will do a better job respecting parental leave.

Kathryn Rubino is a Senior Editor at Above the Law, host of The Jabot podcast, and co-host of Thinking Like A Lawyer. AtL tipsters are the best, so please connect with her. Feel free to email her with any tips, questions, or comments and follow her on Twitter (@Kathryn1).